Nisan is the first month on the Jewish Calendar. It is also called the month Abib.

According to http://www.cgsf.org/dbeattie/calendar 31AD is the only which fits every verse and insinuation in scripture as well as Titus timeline years of his rule.

We focus on Jesus’ Crucifixion week four ways:
1) The first chart gives a simple overview of the events in their correct order.
2) The second chart is an elaboration of the week with insightful prophecies noted.
3) The third chart shows types and shadows surrounding these events.
4) The fourth chart explains step by step how the chart was created and verified.

It is awe striking that these events were prophesied as far back as Moses, ~1,500 yrs BC. King David wrote the prophetic Psalms ~1,000 yrs BC. Proving God lives in the present eternally knowing the past, present, and future simultaneously.

Suggestion: If the charts are hard to read try using the zoom button on your computer to enlarge.

Chart One: Events Only – as we understand the Roman Calendar (our calendar) 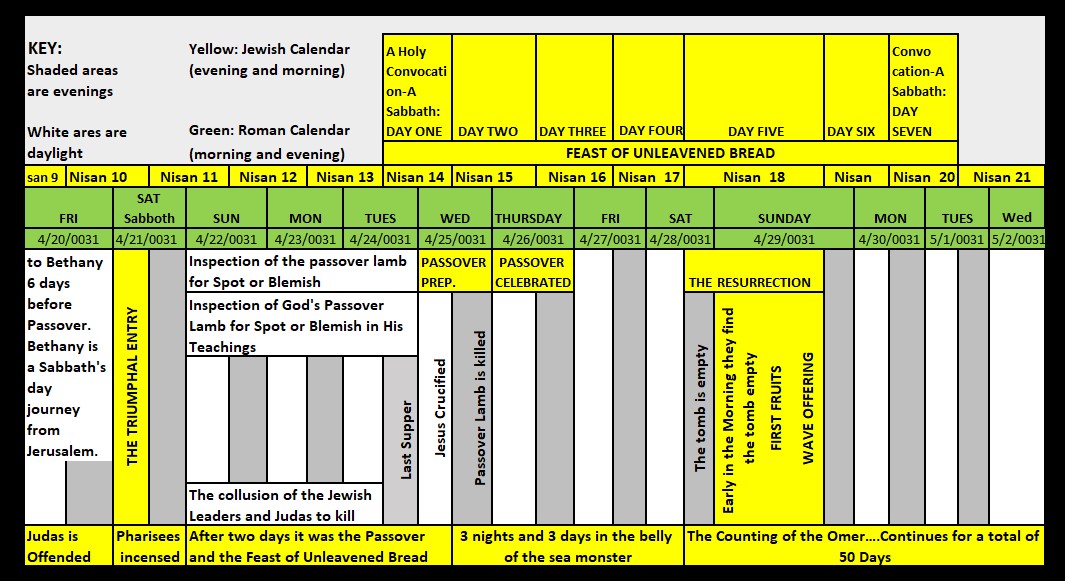 ❸ Sunday-Tues, Nisan 11 – 13: The Collusion of the Jewish Leaders to Kill Jesus.

❹ Sunday-Tues, Nisan 11-13: The Pharisees, Sadducees, and Scribes attempt to trick Jesus with His words.

❻ Tuesday, Nisan 13: The Garden of Gethsemane: Jesus Goes Out to Pray.

⓫ Nisan 14 Monday, The Passover Lamb is in the Praetorium

⓭ Jesus is beaten and mocked. He is given a robe, a reed for a scepter, and a crown of thorns.

⓮ Jesus must fulfill the vow (oath/covenant) made from before time to die on the cross for sinful man, He had not yet created.

By the morning of the 18th, while it was still dark, the tomb was discovered empty.

11. The Wave Offering Leviticus 23:9
Jesus is the First Fruit of the resurrected (never to die again), the first stalk of wheat in the sheaf, then certain tombs of the saints were opened. Together they are the bundled as the Wave Offering.