Timeline: 9th of Av on the Jewish Calendar 587 BC Babylon captured Jerusalem and took all the citizens captive with the exception of the poor farmers and Jeremiah the prophet. The city is left empty and the temple destroyed. 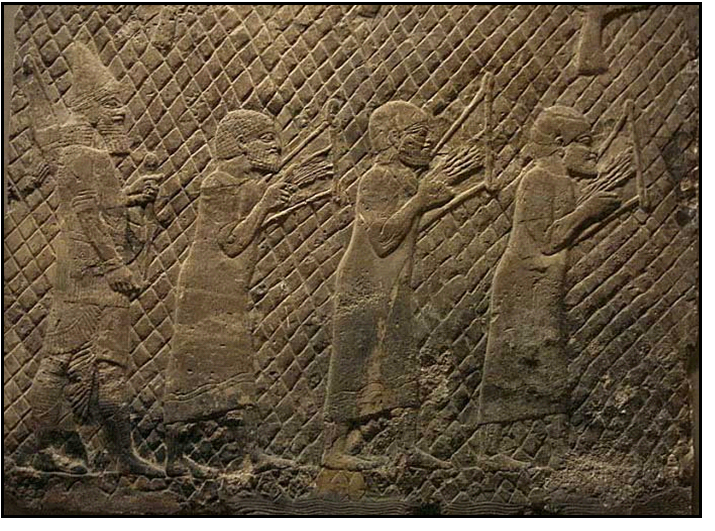 Scene from Lachish Relief: Judahites from Lachish in Assyrian captivity, playing a later form of the Egyptian lyre when the Assyrians captured the Northern Kingdom Israel. Later the Southern kingdom Judah was conquered and taken by the Babylonians. The Lonzed background illustrates a forest.
Psalm 137:3 For there those who carried us away captive asked of us a song, And those who plundered us requested mirth, Saying, “Sing us one of the songs of Zion!”

Lamentations 1:1 How lonely sits the city (Jerusalem)
That was full of people!
How like a widow is she,
Who was great among the nations!
The princess among the provinces
Has become a slave (Lit. forced laborer)!

Lamentations 1:2 She weeps bitterly in the night,
Her tears are on her cheeks;
Among all her lovers
She has none to comfort her.
All her friends have dealt treacherously with her;
They have become her enemies.

Lamentations 1:3 Judah has gone into captivity,
Under affliction and hard servitude;
She dwells among the (gentile) nations,
She finds no rest;
All her persecutors overtake her in dire straits.

Lamentations 1:4 The roads to Zion mourn
Because no one comes to the set (appointed) feasts.
All her gates are desolate;
Her priests sigh,
Her virgins are afflicted,
And she is in bitterness.

Lamentations 1:5 Her adversaries have become the master (Lit. her head),
Her enemies prosper;
For the Lord has afflicted her
Because of the multitude of her transgressions.
Her children have gone into captivity before the enemy.

Lamentations 1:6 And from the daughter of Zion
All her splendor has departed.
Her princes have become like deer
That find no pasture,
That flee (Lit. are gone) without strength
Before the pursuer.

Lamentations 1:7 In the days of her affliction and roaming,
Jerusalem remembers all her pleasant things
That she had in the days of old.
When her people fell into the hand of the enemy,
With no one to help her,
The adversaries saw her
And mocked at her downfall (Sabbaths).

Lamentations 1:8 Jerusalem has sinned gravely,
Therefore she has become vile.
All who honored her despise her
Because they have seen her nakedness;
Yes, she sighs and turns away.

Lamentations 1:9 Her uncleanness is in her skirts;
She did not consider her destiny;
Therefore her collapse was awesome;
She had no comforter.
“O Lord, behold my affliction,
For the enemy is exalted!”

Lamentations 1:10 The adversary has spread his hand
Over all her pleasant (desirable) things;
For she has seen the nations enter her sanctuary (holy place, the temple),
Those whom You commanded
Not to enter Your assembly.

Lamentations 1:11 All her people sigh,
They seek bread (hunt food);
They have given their valuables (desirable things) for food to restore life.
“See, O Lord (Yᵊhōvâ), and consider,
For I am scorned.”

Lamentations 1:12 “Is it nothing to you, all you who pass by (Lit. pass by this way)?
Behold and see
If there is any sorrow like my sorrow,
Which has been brought on me,
Which the Lord has inflicted
In the day of His fierce anger.

Lamentations 1:13 “From above He has sent fire into my bones,
And it overpowered them;
He has spread a net for my feet
And turned me back;
He has made me desolate
And faint all the day.

Lamentations 1:14 “The yoke of my transgressions was bound (watched over);
They were woven together by His hands,
And thrust upon my neck.
He made my strength fail;
The Lord (‘ăḏōnāy) delivered me into the hands of those whom I am not able to withstand.

Lamentations 1:15 “The Lord (‘ăḏōnāy) has trampled underfoot all my mighty men in my midst;
He has called an assembly against me
To crush my young men;
The Lord trampled as in a winepress
The virgin daughter of Judah.

Lamentations 1:16 “For these things I weep;
My eye, my eye overflows with water;
Because the comforter (The Holy Spirit), who should restore my life,
Is far from me.
My children are desolate
Because the enemy prevailed.”

Lamentations 1:17 Zion spreads out her hands (Prays),
But no one comforts her;
The Lord (Yᵊhōvâ) has commanded concerning Jacob
That those around him become his adversaries;
Jerusalem has become an unclean thing among them.

Lamentations 1:18 “The Lord (Yᵊhōvâ) is righteous,
For I rebelled against His commandment (Lit. mouth).
Hear now, all peoples,
And behold my sorrow;
My virgins and my young men
Have gone into captivity.

Lamentations 1:19 “I called for my lovers (specifically, Egypt),
But they deceived me;
My priests and my elders
Breathed their last in the city,
While they sought food
To restore their life.

Lamentations 1:20 “See, O Lord (Yᵊhōvâ), that I am in distress;
My soul (Lit. inward parts) is troubled;
My heart is overturned within me,
For I have been very rebellious.
Outside the sword bereaves,
At home it is like death.

21 “They have heard that I sigh,
But no one comforts me.
All my enemies have heard of my trouble;
They are glad that You have done it.
Bring on the day You have announced (proclaimed),
That they may become like me.

Lamentations 1:22 “Let all their wickedness come before You,
And do to them as You have done to me
For all my transgressions;
For my sighs are many,
And my heart is faint.”