What should I learn from this chapter?

The Beast from the Sea

Revelation 13:1 Then I stood on the sand of the sea. And I saw a beast rising up out of the sea, having seven heads and ten horns, and on his horns ten crowns, and on his heads a blasphemous name.

(Note: this Beast from the Sea has a harlot who rides her in Revelation chapter 17.) 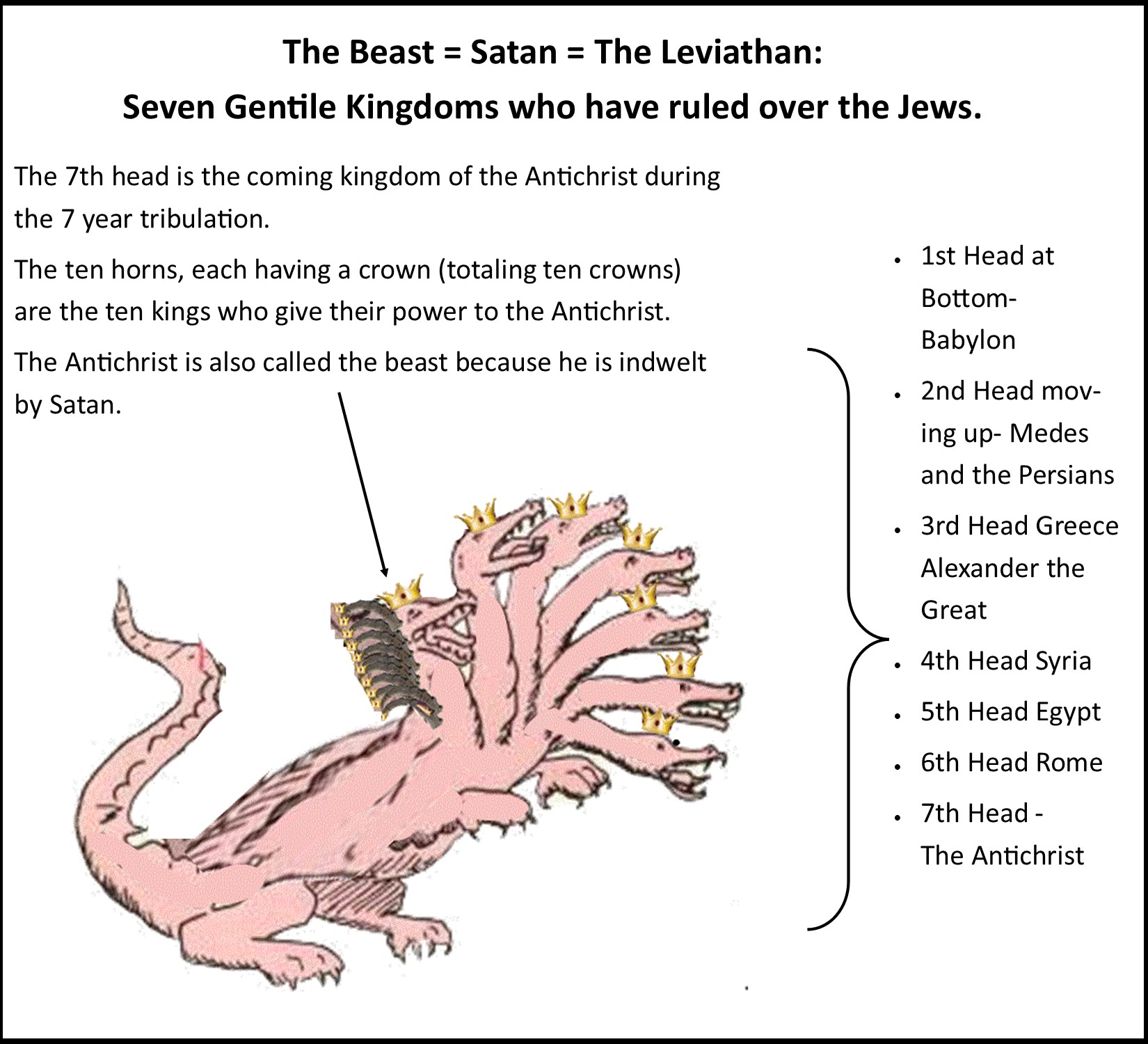 The dragon is Satan. His seven heads represent the gentile nations who have historically, and in the future will rule over Jerusalem (in God’s place).

The ruler over each kingdom of each head is the crown on the head.

The first head was Babylon, the second was the Medes and the Persians, the third was Greece, the fourth and fifth were the king(s) of the north and the king(s) of the South (Syria and Egypt), the sixth is the Roman empire (present time) and the seventh will be the future king during the coming seven year tribulation, the kingdom of the Antichrist.  Note Each head has a crown: Nebuchadnezzar, Cyrus, Alexander the Great, the Ptolemies of Egypt and the Antiochus’ of Syria, Herod of Rome before the Jews are scattered, and then the Jews will once again become a nation before the last head which is ruled by the Antichrist.

Note: Five kingdoms were (in the past), one is (until the last Holy Roman Emperor died in 2011, then the Holy Roman Empire is represented by the pope), then the beginning of sorrows before the kingdom of the Antichrist, the one to come and the last head with the ten horns.

Revelation 13:2 Now the beast which I saw was like a leopard, his feet were like the feet of a bear, and his mouth like the mouth of a lion. The dragon gave him his power, his throne, and great authority.

Revelation 13:3 And I saw one of his heads as if it had been mortally wounded, and his deadly wound was healed. And all the world marveled and followed the beast.

Revelation 13:5 And he was given a mouth speaking great things and blasphemies, and he was given authority to (make war and) continue for forty-two months (3-1/2 years: The middle of the tribulation).

Revelation 13:6 Then he opened his mouth in blasphemy against God, to blaspheme His name, His tabernacle, and those who dwell in heaven.

Revelation 13:7 It was granted to him to make war with the saints and to overcome them. And authority was given him over every (people) tribe, tongue, and nation (global).

Revelation 13:8 All who dwell on the earth will worship him, whose names have not been written in the Book of Life of the Lamb slain from the foundation of the world.

Revelation 13:9 If anyone has an ear, let him hear.

The Beast from the Earth

Revelation 13:11 Then I saw another beast coming up out of the earth, and he had two horns like a lamb and spoke like a dragon.

►This religious figure would have the power of a global leader like the pope.

►* It does not escape notice how Pope Francis came to office through the suspicious resignation of Pope Benedict XVI in 2013 and his current attempts to bring all faiths together under one umbrella.
* The resignation of Pope Benedict was a shock but not without stories of corruption within the Catholic Church such as the Vatican Bank, which for years had been a source of unwelcome headlines for the Catholic Church. It was set up to help religious orders and foundations transfer much-needed money to far-flung parts of the world. But when sizeable proportions of the transactions are in cash and are being sent to politically unstable parts of the planet, it does not take a genius to see what might go wrong. The pope was not always told of these transactions.
* https://www.bbc.com/news/magazine-25121121

► A One World Religion:

Revelation 13:12 And he (the false prophet) exercises all the authority of the first beast (The Antichrist) in his presence, and causes the earth and those who dwell in it to worship the first beast, whose deadly wound was healed.

Aside from movies, what is science doing?

Revelation 13:13 He performs great signs, so that he even makes fire come down from heaven on the earth in the sight of men.

Revelation 13:16 He causes all, both small and great, rich and poor, free and slave, to receive a mark on their right hand or on their foreheads,

Revelation 13:17 and that no one may buy or sell except one who has the mark or the name of the beast, or the number of his name.

Revelation 13:18 Here is wisdom. Let him who has understanding calculate the number of the beast, for it is the number of a man: His number is 666.

See Topic: Mark of the Beast