Satan Works through Men to Achieve his Purposes.

Who is He from Scripture?

See Topic: Names of the Antichrist

Who is he symbolically?

Other verses of note also connect the Antichrist to Gog, the king of the locusts (a devastating army), and Agag, king of the Amalekites.

The name Gog and Agag are interchangeable.

The Greek Septuagint (translated from Hebrew to Greek by the Jews) reads “Gog” instead of “Agag” in Numbers 24:7.

Click here to See notes in Numbers 24:7. (A pop up appears with a link at the top. Click on the link and the document will appear.)

Note: The meaning of the name Agag is “High”. Jesus’ kingdom will be “higher than high” (higher than Agag’s kingdom) Agag was the king of the Amalakites. Amalek is #6 on the list of those who will come against Israel in Numbers 24.

God told Saul the king to kill ALL the Amalekites. But Saul spared their king until Samuel discovered he wasn’t killed and took it upon himself to slay him. In that interim, Agag was able to have a descendant. From his lineage came Haman…and then the Antichrist.

Like Haman, Antiochus IV, Hitler, and the Muslim Imam; the Antichrist has the intention of making Jerusalem a graveyard of Jews, annihilating every last one.

The Antichrist is continually influenced by Satan. Satan is described as a dragon with seven heads in Revelation. The book of Revelation, from the first page to the last page is about the tribulation when every last remaining Jew comes to believe in their one true Messiah, which is the purpose of this time of tribulation. It is God working with and focusing on the Jews, although the entire world is pulled into what appears to be a global black hole of drama.

The nation Israel is a stumbling block for all the nations of the world.

Who is he pictorially?

Who is he metaphorically? 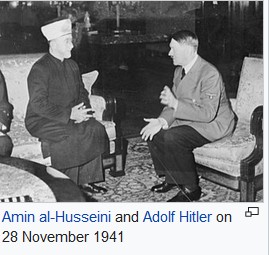 Grand Mufti of Jerusalem, Amin al-Husseini’s post war memoir of his meeting with Hitler: “Our fundamental condition for cooperating with Germany was a free hand to eradicate every last Jew from Palestine and the Arab world. I asked Hitler for an explicit undertaking to allow us to solve the Jewish problem in a manner befitting our national and racial aspirations and according to the scientific methods innovated by Germany in the handling of its Jews. The answer I got was: ‘The Jews are yours.’”

The seven year Tribulation: A Time of Trouble Like Never Before: